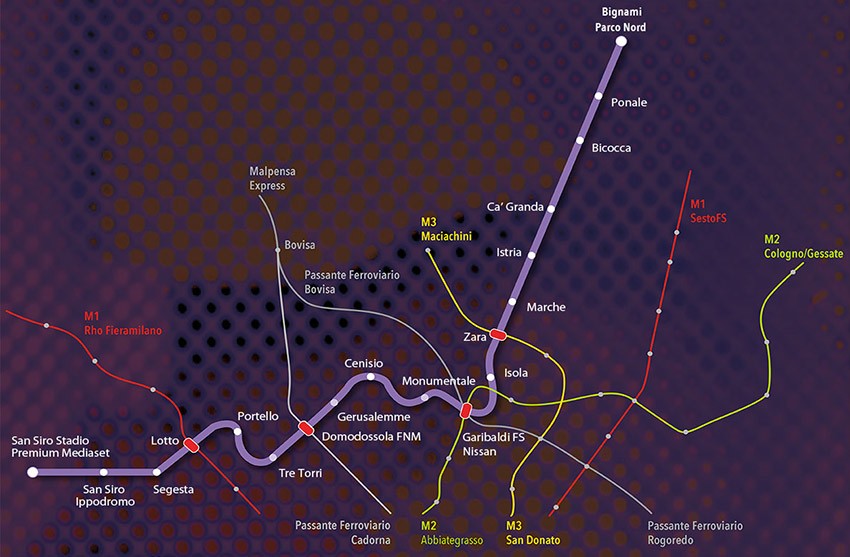 The sky is lilac above Milan.
The lively Lombard city’s new M5 underground line, A.K.A. “la Lilla” (the Lilac), has been awarded the prestigious Transport Deal of the Year 2015 award by the respected Project Finance International Magazine.

The prize underlines the success of the project – which was firmly backed by local institutions – and shines a light on its revolutionary nature and the way it has skilfully married practicality with smartness and current trends.
Its practicality and smartness lie in the spirit of innovation underpinned the whole line: brand-new, ultra-modern stations, routes designed according to passenger needs and automated drivers guarantee an entirely new transport experience.

The line’s synergy with current trends, meanwhile, is represented by the destinations it services. Hopping on the new M5 line allows you to take a trip through the beating heart of the creative Milan, the captivating Milan: the Milan that’s just waiting to be discovered.

If you love art and contemporary culture, your first stop has to be Bicocca: from the eponymous Pirelli Hangar Bicocca, the multi-functional space that – since its opening in 2004 – has become a sacred place for aficionados of all forms of contemporary art, to the Teatro degli Arcimboldi, which opened in 2002 with Riccardo Muti’s extraordinary production of Giuseppe Verdi’s La Traviata, making it an instant fixture of the Milanese theatre scene. Isola and especially Garibaldi deliver tourists and locals alike to the buzz of bars and restaurants and the nightlife on Corso Como & Co.

But that’s not all: above the innovative Garibaldi Station an ultra-modern, hi-tech Milan has sprung into life, a new Milan that has nothing to envy in oft-praised New York or Singapore. The Cesar Pelli skyscraper – better known as the Unicredit Tower – is just one example of the innovative design now characterising the whole area: in the space of just a few years, the Porta Nuova district has become an architectural benchmark that the whole world aspires to, thanks in no small part to the Vertical Forest, an aesthetically breath-taking building that was voted Best Tall Building Worldwide in 2015. Tradition still plays an integral role, however, with the ancient Monumentale cemetery just one stop away from Garibaldi. In this majestic, classic place, you can visit the resting place of the writer Alessandro Manzoni, a Milan man through and through who helped put Italian culture on the world map.

You may think that the M5 has already given you enough to pique your interest, but there is still a lot more to discover. Get off at the Domodossola stop and after admiring the original RAI headquarters (Radiotelevisione Italiana) and its antenna, which for years made it the tallest building in Milan, the Arco della Pace on Corso Sempione will welcome you with open arms for another drink and a whole lot of nightlife. It’s the perfect example of how Milan is a city that lives all day long, 24/7, without ever stopping to rest. Finally, after enjoying the art, culture, technology and leisure of Milan, the M5 line transports you to one of the city’s places of worship, known the world over as the Scala del Calcio: the Stadio Giuseppe Meazza, San Siro.
All that’s left for us to do is wish you a pleasant journey!