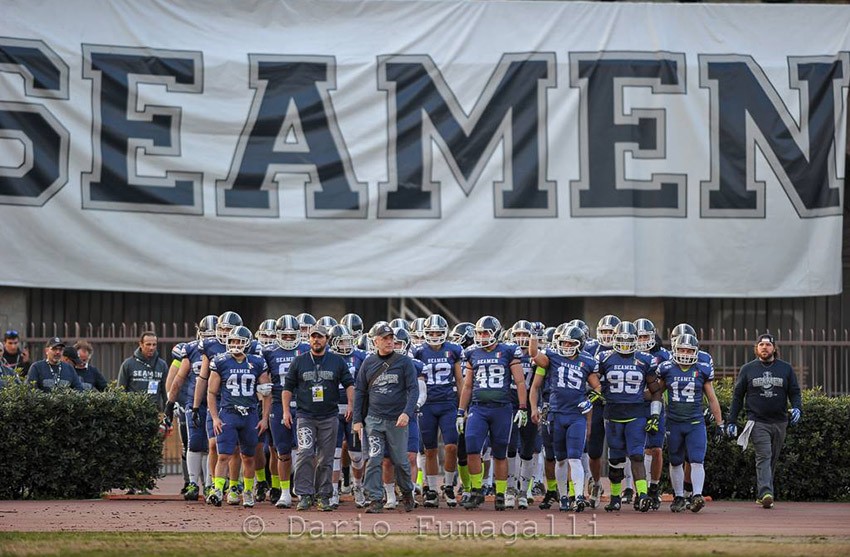 When you hear the word football or futbol in Italy, everyone starts discussing the Champions League, or Juventus, Inter, or Milan. To me growing up in the United States, it meant Football, the hard hitting, action packed sport that I have played since I was 5 years old.

When wanting to specify, you have to say American Football, most people never knew there was such a thing as the Italian Football League or IFL. The IFL consists of 12 teams split into 2 divisions the North and the South.

There was a book written by John Grisham called “Playing for Pizza”, which I read over a year ago on a flight from Des Moines to Nashville. It was my first exposure to what football in Italy was all about. When I made the decision to move to Milano to attend Graduate School at MIP, I just knew I needed to be involved and find out more. I have played football for years and my last game was August 2015 as I finished up my career with a Semi Professional Team called the Des Moines Blaze where over 5 seasons we went 56-2, 5 league titles, and held the honor of National Champions twice. I was a 5-year starter, 5 time All-League, 4-year Captain, and 3-time Pro Bowl selection. I wasn’t sure what the situation would be like once I arrived but I knew that if I couldn’t play then I wanted to coach. I contacted the 2 teams in Milano and within half hour, I heard back from the 2 time back to back current IFL Super Bowl Champions the Milano Seamen. Unfortunately, I was unable to play due to the rules of only allowing 2 import players (which they already had) and having troubles getting an Italian passport being 3rd generation.

Thus my transition from Player to Coach has begun, and what an interesting mix of emotions and feelings it has been. I still get to practice with team and pad up and hit people which I love to do, but making the transition from player to coach has been a struggle. How do you make that transition from what you have done with passion for over 20 years?

The transition has not gotten any easier but it has been a wonderful experience full of emotions and experiences. One of the reasons I wanted to be involved in this experience is I wanted to continue being around the game I love, but I also wanted to transfer my knowledge and experience to help others from a culture where this sport is not mainstream and help them learn and grow. It also has allowed me to really ingrain myself in the city and learn many of the Italian cultures. Using the game as a way to break down communication barriers I am able to learn and improve my Italian skills while helping guys improve and learn English. I can tell you that many of these guys have taught me more than I feel that I have been able to give back to them.

It is a beautiful thing how sport can defy boundaries, cultures, race, etc. and bring people together with a love and a passion for a game. The ability to bond together and achieve a goal, and be a part of something bigger than themselves. Sport, Football, provides many life lessons about how to work in a team, how to lead, how to follow, and how doing your job or not doing your job affects others. The bonds formed from playing sport are strong and stand the test of time. I have had the honor of being a part of the Milano Seamen organization for 6 months now and we have started the season 1-1 and have a long season ahead of us. I look forward to continuing to improve my skills as a coach, help mentor others to grow and learn, as well as improve my leadership and Italian skills. The ability to improve my life skills, forge new friendships, and be involved in the game I love is an amazing experience and has allowed me to divulge deeper into the Italian culture and the city of Milano!

Check out the Milano Seamen at www.seamen.it, or using #SeamenMilano on all social media.