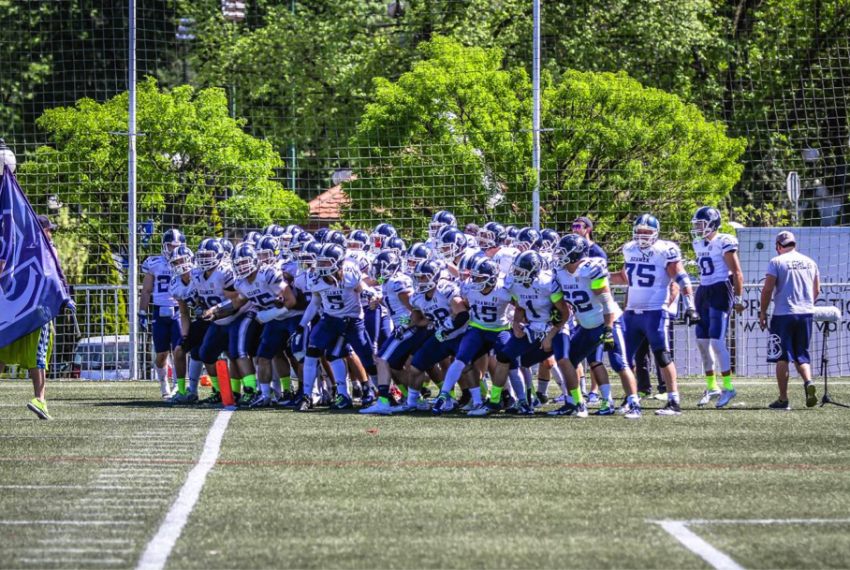 To say that this team is transforming is an understatement. After a slow start to the season, The #SeamenMilano have gone through some tough learning lessons with a young and explosive QB at the helm in Garrett Saffron and an emerging leader in HARD hitting SS David Guthrie. A few weekends ago, we embarked on the long bus ride to Belgrade, Serbia for our first of 2 European Championship Qualifying matches, a bus ride that lasted 15 hours included with early morning wake up calls at the boarders to check passports. Once we arrived in Belgrade everyone looked like an excited dog that has been in a cage all day and finally gets to run around. And we all needed to stretch our legs and get out of that darn bus!

The European Championship is open to the IFL and all other league Champions and Runner Ups, they have the option to play in the European Championship or not. The Seamen after winning the Italian Football League Super Bowl in 2015 wanted to test themselves in the Euro League as they had before, and felt good about their chances this year. We were facing the SBB Vukovi Beograd who have made the Final Four the last 2 seasons. The Final Four this year is in Stockholm, Sweden.

We checked into the Prestige Hotel which conveniently was located next to the stadium, the Seamen took over flying the Italian Flag and Seamen flag on the balcony out front letting everyone know that the Seamen have arrived! After everyone got refreashed and had some lunch a group of us headed to the city center to explore the beautiful city of Belgrade. We had a lot of fun taking pictures, picking up souvenirs, and exploring. This was a great time for the team to bond together and have a little fun.

After film, dinner, and a short walk through I had the chance to hang out with the team without many distractions. It was interesting and fun to talk with some of the team leaders about the focus, determination, and legacy the 2016 team wanted to leave. The team was locked in and they wanted to make a statement after a slow start to the season.

The next day was hot, but the feeling of the team was ELECTRIC! It was game day and a chance for the Seamen to ball out! And ball out they did scoring 50 points in a great offensive showing, while also accruing 4 interceptions, including one interception returned for a touchdown by American Safety David Guthrie. The final score was 50-34 Seamen came out victorious. The Belgrade team was a strong team with a lot of talent and a very disciplined and well coached team, but the day was won by this group of guys who are so motivated and determined to make a statement about the sport here in Italy. I was also given the honor of leading the team onto the field and carrying the flag in!

I started this journey with the Milano Seamen in October 2015 working out and coaching the guys. And after this long weekend with the guys away from Italy, spending a lot of time on the bus cooped up, I learned a lot about this group. These guys are true ambassadors of the sport of football in Italy. Seeing the way they sing on the bus, and live with passion and pride make me proud to be a part of this team. I truly believe in the power of sport and how it forms bonds, and teaches so many life lessons. From learning how to lead, how to follow, how to overcome challenges, to how to not be complacent when you are winning. For me personally I continue to learn a lot about the Italian culture this group of guys and appreciate how they help me with the language and teach me.