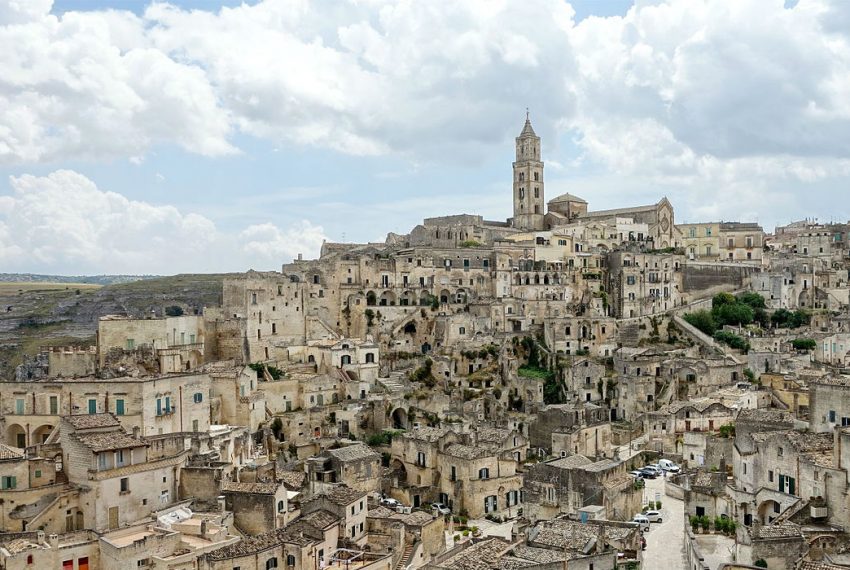 As many people might know, Matera was recently elected European Capital of Culture 2019, chosen from a group of candidates that consisted of some of the most famous Italian cities, such as Venice, Siena, and Perugia. Most people probably don’t know that much about Matera and even fewer are able to pin point the location on a map of Italy without having to ask “Mr Google”! Ok, let’s start from the Geography: Matera is the second biggest town in Basilicata (where exactly?!), the smallest region in the South of Italy, just next to Apulia – or if you prefer – next to the heel of the Italian boot.

As previously said, Matera will be European Capital of Culture 2019, but its recent history was not as prestigious as one might like to believe. Before the end of the Second World War, Basilicata was probably known as exile for anti-fascists and Matera was just a place like any other place in the region. This was all going to change. It was the 1943 when the exile Italian-Jewish writer and anti-fascist Carlo Levi visited Matera for the first time. In Basilicata, he wrote his most famous book “Christ stopped at Eboli” which was a report on the underdevelopment of the South of Italy, where even Jesus Christ had never arrived. When Levi arrived in Matera, he was really shocked by the living conditions in the Sassi caves. Levi commented that these caves reminded him of Dante’s Hell. After the war, precisely in 1948, Alcide De Gasperi, the Italian Prime Minister, after having visited Matera, defined the town as a “shame for Italy”. Despite his keen foresight, he could never have imagined how much the city was going to change in about seventy years after his first visit.

Today Matera is a completely different place, a lively place that built its fortune around its famous Sassi. With the European Capital of Culture Award, Matera followed an ideal path that starts “from the Caves and reaches for the stars”. The Sassi are now the main attraction the town boasts and due to its peculiar landscape, many Hollywood productions have chosen it as the ideal site for shooting blockbusters such as the Passion of the Christ and Ben-Hur.

If you still don’t know about Matera and its Sassi, then you probably need more information! Matera is one of the oldest cities in the world (people firstly settled there 9,000 years ago!). In 1993, it was included in the World Heritage Sites by the UNESCO because the primitive houses built in the old part on the town were considered “the most outstanding example of a troglodyte settlement in the Mediterranean”. Matera offers its visitors the possibility to make a jump into the past and travelling along human history. Visiting Matera and the awe inspiring landscapes takes your breath away. The town sits on a ridge with deep canyons to either side and between them the Gravina stream gently flows following the slopes of the territory up to the Bradano river that finally leads into the Ionian Sea, in Metaponto, where Pithagoras – the ancient Greek mathematicians – founded his School. A good way to discover the region is probably by following the rivers. In fact, Basilicata is well known for its water, which is rich in minerals, the same ones that you will find in its most famous local wine, the Aglianico del Vulture.

Tradition and culture can be considered the two pillars supporting the development of the town. Tradition means gastronomy, music, arts, anything that can be linked with the history of the town. Moreover, thanks to the European Capital of Culture Award, Matera and its citizenship made an incredible effort to reimagine its future starting from its past and tradition. Some departments of the University of Basilicata, the ones in the field of Arts and History, are now placed in Matera. Beside the formal education, the town is trying to promote creativity and creative industries (a business incubator for creative companies was opened just two years ago in the old part of the town) and to set up an environment where new ideas could flourish, a town which is open and inclusive, this is the town’s paradigm.

The season you visit Matera doesn’t really matter, because the city will offer you an unforgettable experience either in Spring, Summer, Autumn or Winter. The alleys that twist and turn will offer you different perspectives on the life of the town. During Christmas time, in the cold night of December, you’ll have the possibility to be in a real nativity scene. In summer, you can take part in the town’s main event, la Madonna della Bruna, on the 2nd of July. If you are brave enough, you can assault the chariot, where the statue of the Holy Mary is carried, and tear it, together with locals. If you’re not much of an eccentric, it would probably be better to go to Matera in Spring or Autumn. My own suggestion would be to walk through the Sassi during dusk, or simply sit in one of the many bars, pubs or restaurant located along the streets (in the past, people used to gather in those same streets to discuss politics – or just to gossip). Order a glass of wine and some appetizers and look up to observe the spectacular air displays of the small hawks (Falco Grillaio) and swallows. It is certain that if you didn’t know Matera, after visiting it once, you’ll already be looking forward to going back!