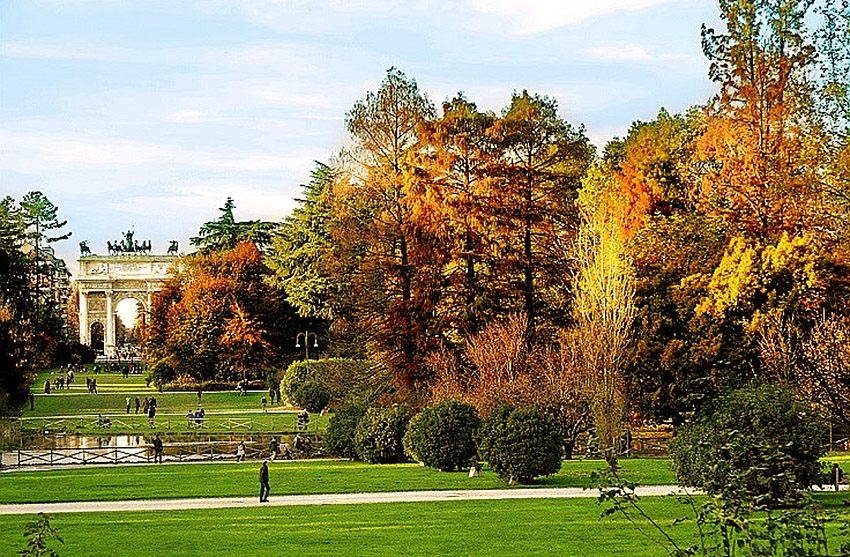 Nothing has been more lovely than jogging in a sunny morning during my half year living in Milan so far. Being neither a fashion geek nor a football fan, I just love to experience a culture by putting myself into its most daily life, and try to see it through a local’s lenses.

Parco Sempione is my favorite jogging area in Milan. Apart from its accessibility by all forms of transportation, it also connects the beauty of nature and the busy downtown, giving me always a joy to taste both sides of Milan when I jog there.

A bright and fresh weekend morning by the end of summer or early autumn is the top choice for a jog after a week’s intense work. I love to go by tram or even get off few stops away from the park, just to walk a bit to wake up and refresh myself slowly with the pace of the city.

This might be the most quite yet energetic moment in a day for Piazza Sempione, a time when the air is only filled by sunlight and few chirps of the pigeons. By around 10am, across the street, you can see people eating breakfast, chatting, enjoying the beautiful and relaxing time at the bar. Once in a while a group of two to three bicyclers, either a couple or a family, slowly bicycles around the piazza. Between Arco della Pace and the entrance of Parco Sempione, one to two groups of people are usually warming up for their running.

The running route is flanked by the Arch of Peace till Sforza Castle, with a length of 2.2 km around the park. When running, you can see dogs chasing each other on the lawn covered by golden sunlight, runners either running individually or in group, young parents walking with small babies, and the aged walking and chatting with their old friends. If you like other outdoor exercises like yoga, Parco Sempione is also the exact place to visit, as you can always find groups of people practicing around on the lawn.

Sometimes you can also find aged people jogging in the park. Though they jog really slowly, trying not to hurt their knees, I am very motivated by their spirit of “Age doesn’t matter”.

Parco Sempione presents another view in winter. Because of the coldness, frequent fog and the shorter day time in Milan, the number of visitors is much less than that during warmer times of a year. Yet you can always find persistent runners practicing in the park. The park looks a bit lonely in the steely tints of winter, but is meanwhile also safer. As non of the horse-chestnuts are still hanging on the trees, you can jog across the wood of aesculus hippocastanum without the usual concern in autumn that its stonelike fruits would fall and hit you.

You are interested but want more taste of being a runner in Milan? Well, I would recommend below 2 routes which I like a lot too.

For people who want to enjoy a more urban view of the historical Milan, the route with a length of 2.5 km in the heart of Milan between Piazza Mercanti and Giardini Pubblici is highly recommended. It starts from Duomo di Milano, passes through Porta Venezia, Giardini Pubblici, Museo Poldi Pezzoli, Teatro alla Scala, and eventually comes back to Duomo di Milano. This definitely is worth trying if you want to have a better general idea of downtown Milan in a very short time. Just don’t forget to start early in the morning before tourists flood into the city center for the stunning views!

For lovers of lakes, the route of 3.7 km around Idroscalo in eastern Milan can be a good choice. Milan is an inland city; there is no seaside, so people directly call Idroscalo, the biggest (artificial) lake of the city, “Sea of Milan”. It was originally constructed as a seaplane airport in the late 1920s, and is now a park and training center for water sports. This is also one of the best options for summer jogging thanks to the coolness brought by the water.

Though I suggested the two extra routes, I refuse to go deeper and offer more details. Spring already arrived, and it is again favorable time for outdoor excersise. So why don’t you join me and experience them by yourself? After all to learn a culture the best way is to live it, and jogging is one of the many ways!

Jiaqi is a current student of the Full Time MBA 2016-2017, attracted to Italy by its fascinating language and culture. She claims herself as an experimental cook, a gym girl, an observer of diversity, a curious soul eager for constant personal growth.