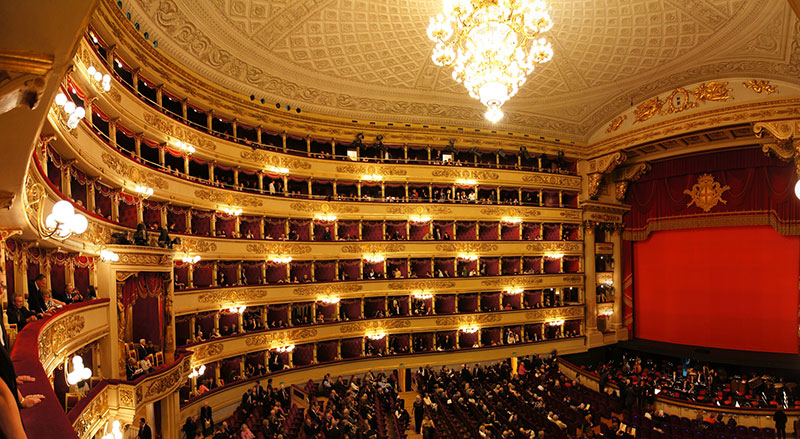 It is December and Milan is celebrating.

Besides the Christmassy atmosphere that’s beginning to fill the city streets, on the 7th of December Milan will be celebrating the traditional festival of Sant’Ambroeus, as the people of Milan call him, the patron saint of the Lombard city. On this holiday, while the schools and offices are closed, the city celebrates with numerous public events, non-stop opening hours in the shops and one of the year’s most important social events, which the people of Milan are particularly fond of: the opening of the opera season at Teatro alla Scala. The first night of the opera at La Scala on Saint Ambrose’s Day is a relatively recent tradition in the centuries of history of Milan’s famous theatre. It dates back only to 1951 and has historically represented not only a musical appointment of national importance, but also a social showcase and an excellent opportunity, in the spotlight, for all kinds of contestations.

This year the famous conductor, and outstanding pianist, Daniel Barenboim directs the orchestra of La Scala on the romantic notes of Beethoven’s Fidelio. And don’t think that it’s impossible to get tickets for his performance. For this performance, as for all the others, Teatro alla Scala makes 140 tickets available for seats in the gallery the day before at the evening box office at reduced prices.

To create a festive and joyous atmosphere, during the week leading you up the first night at La Scala, pieces by Beethoven are piped through Galleria Vittorio Emanule and in some of the underground stations. On the days after, music will be everywhere, with a rich calendar of over forty free events: concerts, shows and masked parties with DJs promoted by the Municipality of Milan and dedicated to Beethoven. Also on the 7th of December every year, for a week, starting way back in 1510, Milan has hosted the traditional market of the Oh bej! Oh bej! The market, awaited expectantly by everyone from Milan, offers sweets, typical delicacies, crafts, balloons and gifts to put under the Christmas tree and is held at Foro Bonaparte, on the road next to Sforzesco Castle.

Milan has lots to offer in December, as well as in all the other months of the year: it is a modern city projected into the future, but with an important history and culture, as well as strong traditions which it loves to share with those who want to get to know it. Milan loves music, celebration and welcoming visitors.

Milan is the right place at the right time.  Are you ready to discover it, get to know it and experience it?