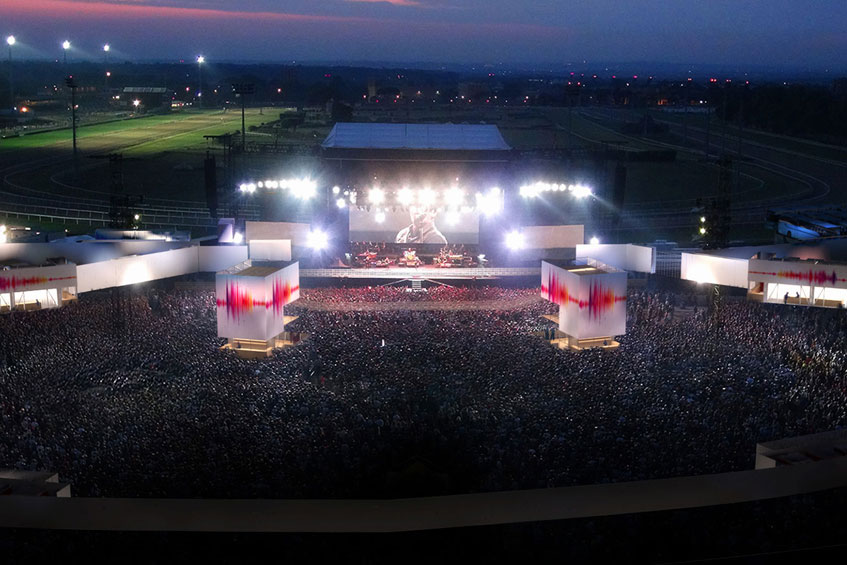 Anyone who says “Milan empties in the summer” has probably never even been there.

Even in the hottest months of the year, the buzzing capital of Lombardy welcomes millions of tourists from all over the world and attracts people who prefer their entertainment to come in the form of shopping, nightlife, music and culture than beach umbrellas and pedalos.

If work, study or mere choice keeps you in Milan this summer, be aware that the diary is already jam-packed and things are already getting started.

Let’s dive into the sea of events that’s flooding Milan this summer!

Milan’s Hippodrome is the home of the Milano Summer Festival 2017. This huge green space on the outskirts of the city will host a series of concerts in June and July. There will be a wide range of styles and genres, going from Daddy Yankee who kicked the festival off on 11 June, to a metal night on 2 July, to rock group Evanescence who dominated the charts in the early 2000s, and wrapping things up with the Red Hot Chili Peppers concert on 21 July.

The more organised among you will have already secured your tickets for the massive concerts at San Siro at the start of the summer. Tiziano Ferro, Depeche Mode and Coldplay are just some of the artists performing, but needless to say they are all already sold out!

In 2016, the decision was taken to requalify the area set aside for the Universal Exposition that put Milan into the spotlight in 2015. After welcoming over 300,000 visitors, the space known as EXPerience has grown yet again this year. After its reopening on 27 May, the free park that everyone can enjoy – teenagers, families, children and pets – will host events, music and performances throughout the summer.

EXPerience is ideal for those of you who just want to relax and enjoy the feeling of the sea thanks to the urban beach, beach volleyball court and beach bar with a DJ area for summer-style aperitivos.

In the evening, everyone turns their heads skywards for the Tree of Life performance that has been updated and promises to take your breath away.

Does the summer’s baking sun ignite your passion for art and culture even more?

Well, you’ll find everything you need in Milan.

Unfortunately, the Keith Haring exhibition is closing on 18 June, but the summer season is ready to bring other masterpieces for the cultural aficionados. Chief among these is the hugely anticipated Kandinsky exposition, which started on 15 March and continues until 9 July at MUDEC, the Museum of Cultures.

Fans of business models and retail innovation cannot miss the exhibition dedicated to La Rinascente at Palazzo Reale from 24 May to 24 September. This year the store is celebrating a century since Gabriele D’Annunzio bestowed this name upon it. Since that day, La Rinascente has consistently innovated and left a mark in the history of Italian fashion and large-scale distribution models.

From 9 June to 27 August, lovers of other forms of art can go to Castello Sforzesco for the Estate Sforzesca which is putting on more than 60 performances of theatre, classical music, jazz, pop and dance.

If cinema is where your heart lies, don’t miss the new edition of Arianteo, Milan’s open-air cinema that returns this year to delight fans of the big screen.

More than 100 films will be shown in more than five different locations, including the Palazzo Reale, Umanitaria, CityLife, Chiostro dell’Incoronata and Fabbrica del Vapore (a new addition for this year).

Some of the films you can see include Damien Chazel’s La La Land, Gabriele Muccino’s Collateral Beauty, the thriller The Girl on the Train and the brilliant The Wedding Plan by Israeli director Rama Burshtein, which begins the season at the Palazzo Reale. What better way to improve your Italian in such a wonderful setting?

If, on the other hand, relaxation, sport and poolside fun is your thing, make sure you visit the swimming pools on the Milano Sport circuit. You can reinvigorate yourselves with a swim, sunbathe with a book, enjoy an aperitivo with friends, take yoga lessons and so on. Come evening, the pools magically transform into glamorous locations for hosting events, concerts, parties, DJ sets and crazy disco nights.