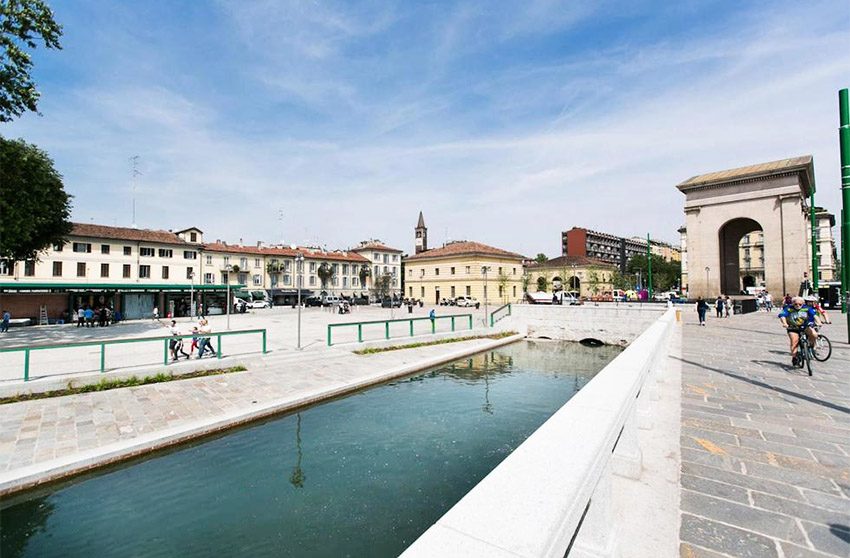 “See you tonight at the Navigli!” Without a doubt, this is one of the most common sentences you’ll hear from the youngsters who populate Milan’s nightlife.

The Darsena dock district, full of history and tradition, has evolved hand-in-hand with the city’s international development. In 1603, even before the area was finished – the Spanish rulers who dominated the region in that era, had commissioned its construction – the Darsena already represented a reference point for those who lived in Milan. It’s no coincidence that one of the greatest geniuses in history Leonardo da Vinci worked on the refurbishment of the sluice system that regulated the flow of water towards the dock.

Returning to the present day, despite the progress of time the Darsena has not lost its sense of appeal, far from it. The full restoration of the district just over a year ago, ahead of Expo 2015, restored prestige to one of the most fascinating areas of Milan.

The atmosphere here is as lively as it ever was and hinges on the many cool spots of the area, like Vista Darsena – the bar born from the same alchemy behind the famous Cafè del Mar in Ibiza. From morning to evening, you can grab a coffee or a drink a few metres from the canal. Great music spun by the best DJs of the moment provide a constant backdrop. While you’re there, do not miss out on the opportunity to soak in the breath-taking view of the old part of Milan that arches over the Darsena.

For lovers of street food and drink, the delicious covered stalls of the Mercato Comunale stands just a few metres away. The market is dominated by a decidedly international air: the exquisite iron and glass structure is home to some of the most interesting culinary offerings that are sure to satisfy every palate.

In the summer months, the locals in the Navigli simply cannot miss out on a trip to the Darsena Summer Village, a place where sport reigns supreme every minute of every day. Every match from the recently concluded European Championship was broadcast here live and it will be the same set-up for the hugely anticipated Olympic Games in Rio de Janeiro, which are just around the corner. The Darsena Summer Village doesn’t only offer the chance to watch sport, thanks to the Sky-sponsored football area you can get involved in small-sided games of football, absolutely free of charge.

The Summer Village is also able to adapt to the seasons, offering the very best to Milanese locals and the thousands of tourists who are welcomed in the capital of Lombardy at any time of year. During winter, the Darsena transforms itself into the Christmas Village. Ice skating, water displays and hot chocolate are all on the menu, along with the chance to get a selfie with Santa Claus.

As you can see, the Darsena is the true beating heart of life in Milan. Young and old alike are able to enjoy fresh and exciting experiences here. Recently there were countless examples of this with the Silent Disco, a disco where the fun-makers danced to music on headphones, and the events based around virtual reality at the Samsung Theatre, set up next to the Darsena.

What are you waiting for? Get yourself down to the Darsena.