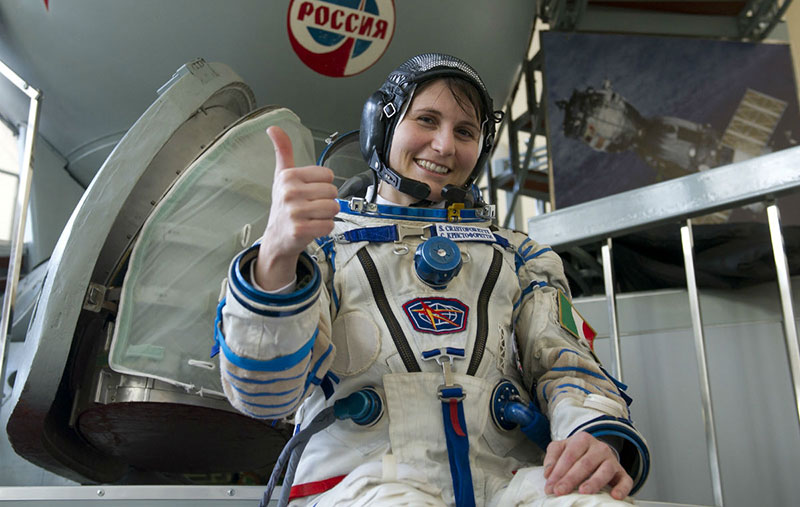 Samantha Cristoforetti is the first Italian female astronaut to go on a mission in space.
On the 23rd of November, Samantha left planet Earth from the Bajkonur station in Kazakhstan, along with the rest of the crew, Russian Anton Shkaplerov, and American Terry W. Virts, to reach the International Space Station (Iss), the outpost of humanity in outer space, but also an authentic science laboratory where, almost for the past 15 years, crews from all the project partner companies have lived and carried out research. Born in Milan 37 years ago, Samantha joined the astronaut corps of the European Space Agency (Esa) in 2009. Samantha is an engineer but also a military pilot and during the six-hour flight on board the space shuttle Soyuz that took her into space, she carried out the delicate jobs of the in-flight engineer. Her long training course was carried out during long months of intense training and numerous international experiences of study and work. The latter, according to her, were particularly helpful in making her “happy in the place I’ve always wanted to be”.

During the 6 months that Samantha is going to spend on the International Space Station in orbit around the Earth, she will be carrying out tests and researches in various scientific spheres and particularly within the scope of nutrition. The aim is to communicate the planet Earth the correct diet to follow, using the advanced knowledge of spatial technology and medicine. In space, certain processes take place much faster than they do on Earth. And this makes the research faster and of exceptional scientific value. Moreover, the possibility to work in a laboratory in a state of microgravity allows scientists to observe phenomena which would not otherwise be seen, and do things that cannot be done on Earth.
The programme of the Futura mission envisages experiments on human physiology, biological analyses and the 3D printing of objects in the absence of weight, for a total of 16 different experiments which could be beneficial both to the lives of astronauts and those of us here on Earth. If you’d like to find out more, Samantha, alias AstroSamantha, is very active on Twitter, where she tweets pictures of her everyday life and fabulous views of Earth seen from space every day. She also keeps an interesting daily log which you can read on Google +.

On December 11 and 13,  the ISS will become visible in the night sky of Milan and northern Italy. To us it looks like a bright star moving quickly. The ISS is so bright, it can even been seen from the center of a city. NASA’s Spot the Station program lets you sign up to receive alerts to let you know when the ISS will be visible from your location – anywhere in the world. Obviously Milan is proud of the fact that Samantha was born here and happy that she is exactly where she always dreamed of being.

Where would you rather dream of being and what are you doing to get there?

An international experience like the MBA of MIP Politecnico di Milano, the city where Samantha was born, could be a new departure point for finding your way, achieving your aims and get a different perspective, like she’s doing from space!