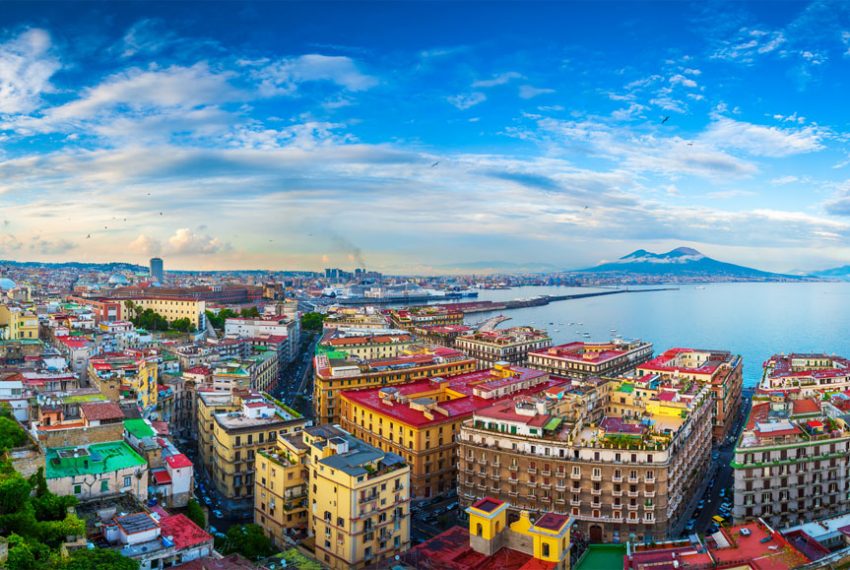 I wouldn’t like to offend anyone, however my personal opinion about Italy is that the country was born in Naples. I know that it sounds like the “Out of Africa” theory of paleoanthropology, that proposes a single area of origin for modern humans corresponding to East Africa, but my theory is really based on facts. What do most Italians eat? What is the most famous Italian food? You will probably answer either pizza or pasta. Right, both of them are from Naples  ̶  thus if all Italians eat Neapolitan food, all the Italians are from Naples.

Apart from this provocative introduction, Naples is such a wonderful city that one should visit at least once in his/her life, running the risk of falling in love with such a unique place. Most of the foreigners that visit Italy stop in Rome, they never visit Naples. Probably they just pass by on their way to Capri, Amalfi or Positano, and this is a pity since they miss the opportunity to have a trip through Italian history.

If you search for “Naples” on the internet you will find tons of information and wonderful pictures. On Wikipedia you can read: “Naples (from the Ancient Greek: Νεάπολις, meaning “new city”) is the capital of the Italian region Campania and the third-largest municipality in Italy after Rome and Milan. Naples is one of the oldest continuously inhabited cities in the world. It became the capital of the Two Sicilies until the unification of Italy in 1861. During World War II, Naples was the most-bombed Italian city.”

In spite of the bombs, the city still remains one of the most beautiful and unique places in Italy. We even have an adage: “See Naples and die!” ̶  that is to say that a person cannot die without visiting Naples.

Naples’ historic city centre is the largest in Europe, covering 1,700 hectares and enclosing 27 centuries of history, and is listed by UNESCO as a World Heritage Site. You can visit the very charming Naples Underground, or the statue of the “Veiled Christ”, which is definitely one of the most beautiful sculptures in the world. As for the natural beauties, Naples boasts a wonderful coast and Vesuvius, the volcano that destroyed Pompeii and Herculaneum.

However, Naples is much more than its beauties. It is music, culture and…food! Let’s wait a minute, I am not from Naples, so I need two friends from my course who will help me write about Naples: Claudio Di Maso and Alessandro Ranieri. Both of them are from Naples but both of them left their hometown and brought  their brilliant brains to Milan (Claudio) and Turin (Alessandro).

When we started talking about Naples, we needed a few minutes to overcome some melancholy, a bit of saudade, as Brazilians, or rather, “pucundria” as a Neapolitan would say. After this moment, we agreed on how to talk about Naples and guide the reader through the sounds and colours of this wonderful place: we would describe a normal day off in Naples.

Like all Italians, a normal day in Naples starts with an espresso. Anyway, espresso in Naples is different. Cups are extremely hot and the coffee is always served with water, there is no need to ask since you should rinse your mouth before tasting the coffee. Moreover, the espresso ritual underlines the generosity of Neapolitans. Most people comply with the tradition of “suspended coffee”, which means leaving some change in order to pay for an espresso for someone else who can’t afford it. One of the best pastries to accompany the espresso is the famous “Sfogliatella”, which is a shell-shaped filled pastry. I suggest trying this pastry at “Antico Forno delle Sfogliatelle Calde Fratelli Attanasio” (The Attanasio Brothers’ Old Bakery).

Now you are ready to walk through the beautiful city centre listening to the voices and maybe the music. Indeed, Naples is also music. Neapolitan music has been highly influential, credited with the invention of the romantic guitar and the mandolin, as well as notable contributions to opera and folk standards. Moreover, over time different music styles arrived in Naples, from Africa or America, brought by the boats and mixed with the traditional music with extremely interesting results. Spending the day visiting all the attractions that the city has to offer, is time for eating. Due to the quality and quantity of good restaurants, it is always difficult to choose a place to eat in Naples. Food-lovers should know that Naples is one of the Italian cities with the highest number of accredited stars from the Michelin Guide. Anyway, if you go to Naples, you need to eat pizza. With Claudio and Alessandro we discussed for a while which pizzeria to suggest and we finally agreed on a name: “Da Michele”, a very traditional pizzeria in Forcella, where you can order either Marinara or Margherita. However, feel free to choose another one since the list of pizzerias is extremely long; you can simply go to “Spaccanapoli” and choose one at random  ̶  the experience will always be worthwhile.

We can probably end the food-tour here or, if you prefer, you can have a babà at Bar Gambrinus or at Pasticceria Scaturchio. By the way, don’t forget to have another espresso.

Naples is not only food, it is art, science and innovation. We have mentioned that the city has a very long history as well as beautiful buildings, museums and castles to visit. As for innovation, I always like reminding people that the first railway in Italy was built to connect Naples and Portici, a short distance but remarkable for 1839. If we would like to talk about the present, just a couple of days ago the Cisco Networking Academy was inaugurated, which also represents the first collaboration between Apple and Cisco.

To conclude, I wouldn’t like the reader to think that, together with my friends Alessandro and Claudio, I am singing the praises of Naples but it is important for people to know that Naples is different from what the British newspaper “The Sun” wrote. As sharing is a buzzword of our time, we would like to share Naples, the beauty of a city that not many foreigners know but that everyone falls in love with.